The last 7 years taught us a lot about Devopsicon - our beloved unconference format. In this post we share how this event came about at Meltwater Engineering, and how it is striving in present days. For this we interviewed organizers and participants to give you an idea how the unconference works as well as the untold number of connections and sparks born every six months at Meltwater’s favorite collaborative event.

Not Your Ordinary Conference

Earlier this year, Meltwater Engineering Director Sebastian Spier sat in on a Zoom presentation that gave him a new perspective on how curiosity and passion can make way for innovation. As he sat in his Berlin home, a colleague hundreds of miles away gave him and several other participants the lowdown on how he saved his team thousands of dollars by optimizing a software cluster on the Meltwater platform in his spare time.

“It was about how an engineer [on a team where] they have a day where they can work on a problem that has been itching them for a while,” Sebastian says. “It was a great story of how giving people liberty in what they work on yields great ROI.” The presentation, “120 to 24 Nodes,” by Meltwater engineer Alexander Gunnarsson, was one of many sessions that took place during the 12th official Devopsicon. But don’t confuse Meltwater’s twice-a-year, company-wide, knowledge- and skill-share spectacular with any old professional conference.

In the simplest terms, Devopsicon is an “unconference”, meaning it has no agenda set ahead of time. Rather, attendees propose and facilitate their own sessions, with the ability to come up and host new ones on the spot. The result is an event whose success is directly in each attendee’s hands. “I think that’s one really cool thing about the event,” says Sebastian. “It puts everybody in charge.”

History of Unconferences at Meltwater Engineering

Devopsicon unofficially started at Meltwater in 2015 as a collaborative effort between the Gothenburg, Sweden, and Berlin engineering departments. Initially, they came together to discuss and plan how to update Meltwater’s processes with a DevOps mindset. After a few iterations, the departments went to Agile Coach Jeff Campbell for guidance on how to structure the growing event. He introduced them to the unconference structure and the official Devopsicon was born.

“The way a regular conference is structured, you get really excited by the keynote. And then the conference goes on for two or three more days, during which time you’re just absorbing more and more content but not actually able to do anything about any of the content you’ve gotten until you get back to your job,” Jeff explains. “With the unconference format, if you hear about something in the morning that you think is really interesting, you can basically be doing something about it, come the afternoon.”

Sessions generally take one of a handful of formats:

And while most sessions were DevOps-related in the early years, these days topics reach far beyond the software development and operations framework that gave it its name. Sessions can be as closely or loosely tied to technical work as desired.

“When I first heard of this idea of an unconference, I wondered how the heck that was gonna work. But people always come up with all kinds of creative ideas and we end up keeping the conference overflowing with sessions and options,” says Christina Arsenault, Meltwater’s Senior Director of Global Support who also helps with logistics, recruiting, and support for the event.

After attending her first Devopsicon in Gothenburg in 2016, she joined the planning group. “I was amazed at how it could bring so many different areas of the company together that, even with your best efforts, can get siloed,” she says. “People might have assumptions about an area of the company they never dealt directly with. And all of the sudden they have a good acquaintance that they’ve made that now they can reach out to when they have ideas. You would see so many things after every Devopsicon that came about because people made that connection. I think that is just priceless.”

😀 It's the first morning or the first day of our internal #devopsicon unconference. We've already had great sessions!

We'll be publishing some of these on YouTube pic.twitter.com/J4l1imE5pl— Meltwater Engineering (@MeltwaterEng) April 26, 2022

Like most events before the onset of the COVID-19 pandemic, Devopsicon used to take place in person, alternating between Meltwater’s large Engineering offices. Read more about how Meltwater handled the nuts and bolts of Devopiscon.

Present-day, pandemic-safe Devopsicons take place remotely. Events like a virtual “after party” help make up for the spur-of-the-moment social encounters and brainstorms that made the in-person event so special.

The new format has made the event more accessible than ever, as people who normally could not travel for the event can now hop in from wherever they are. Plus, the wonders of video conferencing can, in some cases, allow for a different level of intimacy. As Sebastian points out, the format let facilitators bring participants right into their kitchens for a latte session and a popular cake decorating session. That would have been impossible in the earlier days of the event.

Devopsicon 12, which took place from April 26 to April 29, had more than 250 proposed topics. In the end, about 250 participants took part in five sessions occurring simultaneously for 14 hours a day, for four days straight. Like previous virtual Devopsicons, the recordings of the sessions immediately result in a sizeable knowledge bank. 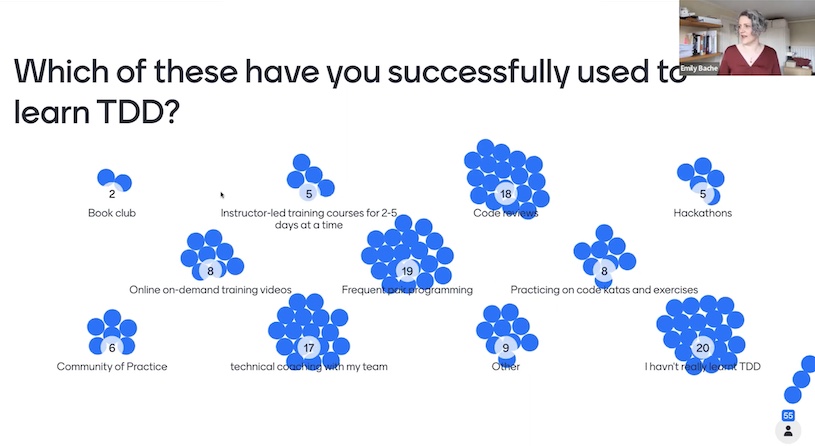 It kicked off with “Technical Coaching: A Way to Spread Skills and Build Culture,” a keynote presentation by Technical Agile Coach and software developer Emily Bache. Topics of the many subsequent sessions spanned an inspiring range. From using Meltwater data to drive sustainability for the company and clients to a how-to presentation about the features of design software Figma. From a live hacking JavaScript session to a presentation on how brain chemicals can be leveraged to strengthen teams. From a meeting among 3D printing and modeling enthusiasts to a “lightning talk” about terraforming GitHub to a discussion of how to improve the onboarding process for new hires.

“I think for new hires, or if Meltwater buys a company and then we bring their engineers to Devopsicon, they will have a sense of what type of crowd Meltwater is immediately,” says Sebastian. “It will tell you that it’s serious, but not to a fault. There are so many subtleties that wouldn’t happen in a formal onboarding process that will happen in an event like this. It’s one of the signature events for Product & Engineering, for sure.”

Today, Sebastian starts each day with a cappuccino he made himself using skills he learned straight from the coworker thousands of miles away who held a barista tutorial session at Devopsicon 12. It’s just one result of the untold number of connections and sparks born every six months at Meltwater’s favorite collaborative event.