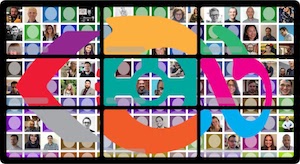 For three days in June, 238 people from Meltwater Product and Engineering organized and participated in our first remote unconference. The event featured 118 sessions focused on sharing knowledge, training, and problem solving. The event received an overwhelmingly positive response from the people that attended.

In this blog post we take a look at how we facilitated this event, which tools we used, and why we have already started planning our next one!

Why We Went Remote

Unconferences have become a critical part of how Meltwater keeps our global engineering organization of 15 offices and 400+ people connected. We have used these events to build relationships, share knowledge and get shit done. In 2015 we experimented with our first unconference as a means of promoting the practice of DevOps. It was held in our Gothenburg office and attended by 8 engineers, we have held nine more events since then at various engineering offices and it has grown to nearly 100 people from Engineering and Product.

You can read our blog post about what an unconference is and how to organize one. We also shared in a podcast how these events have helped us boost collaboration and promote DevOps culture.

The COVID-19 pandemic quickly put a stop to our plans for a spring unconference. Suddenly the core value of the unconference was being tested: Bringing people together. Additionally, the priorities for the business and the people that make it up were being upturned. Our initial reaction was to cancel the event. We took a couple weeks to reflect.

Even with the chaos of the changing world, there was still a need to meet the objectives of the event (build relationships, share knowledge and get shit done). In fact, as many of us worked in isolation from home, these things were needed more than ever.

In the traditional unconference we generate topics live at the event, but that would be very time consuming and cumbersome at the online version so we decided to gather topics beforehand.

We sent out a simple google sheet with some fields to fill in with topics you wanted to have a session about.

We sent many emails reminding people to add items to this topics sheet. It is important to remind people many times as they will forget after they add their first item. In addition to adding their own session topics, they can also read through the sessions from others and indicate which sessions they are interested in. People were still allowed to add topics during the event, but we wanted to get as many added beforehand as possible.

Once we identified the tooling we wanted to use we also had everyone sign up for those tools ahead of time so we wouldn’t be dealing with that during the event itself. We talk more about how we worked with choosing tooling in the “Keys to success” section later.

We used four main tools in order to plan and execute the event:

Facilitating an Unconference in Real Life

The easiest way to explain how this worked in an online environment is to briefly explain to you how it works in real life. For the full details see our blog post How to Organise an Unconference. 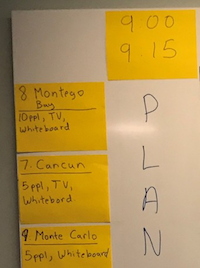 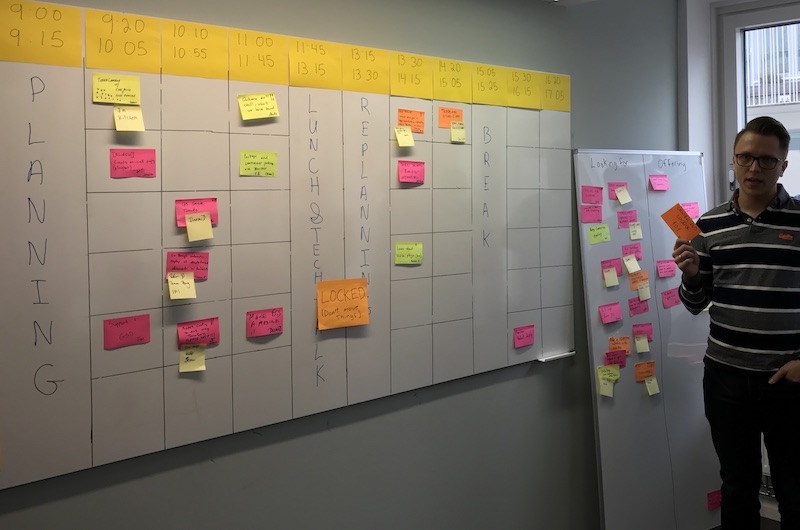 The chaos of 80-100 people talking and moving post-it notes around works pretty well in real life. As a facilitator you really just need to ask people to keep the noise down while others are speaking and remind them of the time. Online this would be total chaos, and so requires some stricter rules as well as more formal facilitation.

There are a lot more intricacies to how we ran the event and dealt with specific issues, but this is the basic framework we used.

We created a digital version of the planning board in google sheets. Since we are in multiple times zones now, it looks a little more complicated, but is exactly the same idea. Note: This was also a good place for all the other links we wanted to make it easy for people to access. 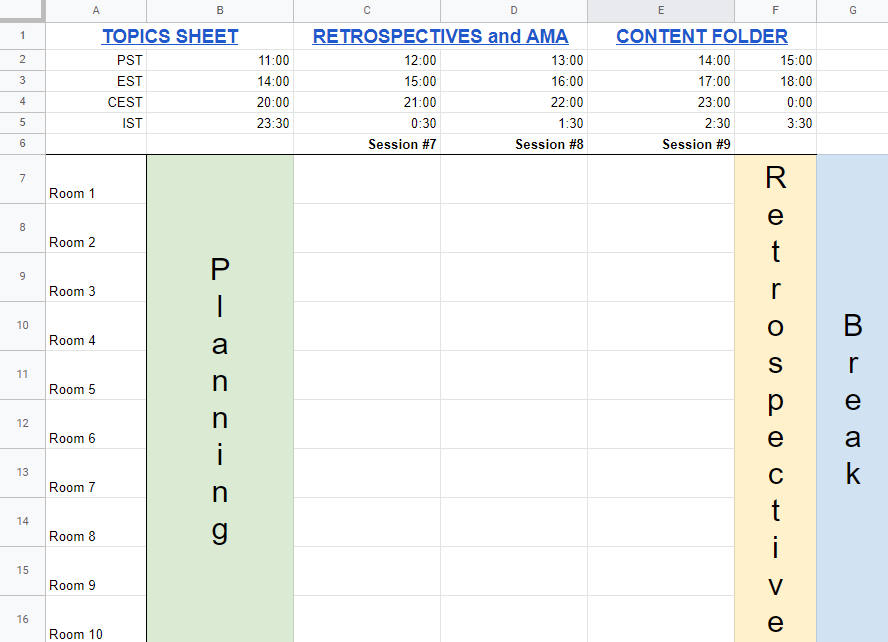 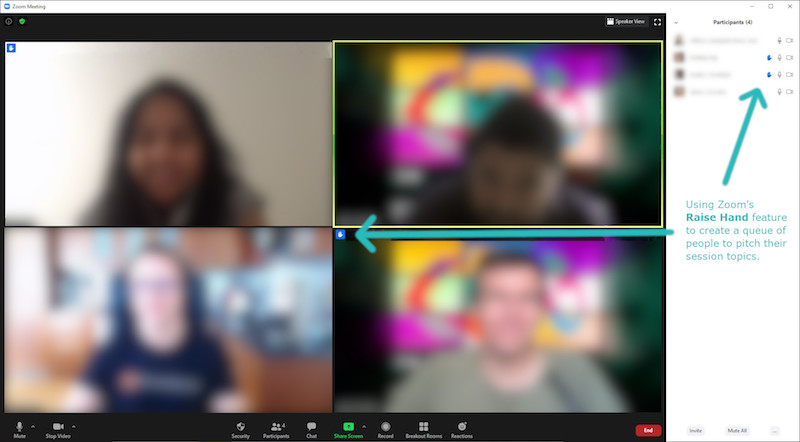 Finally, we used a tool called qiqochat.com, which was the glue that held the whole event together. It’s fair to say, it would not have gone nearly as smoothly without it. We used it as a wrapper that encompassed both zoom links, and our planning board (see the annotated screenshot below). 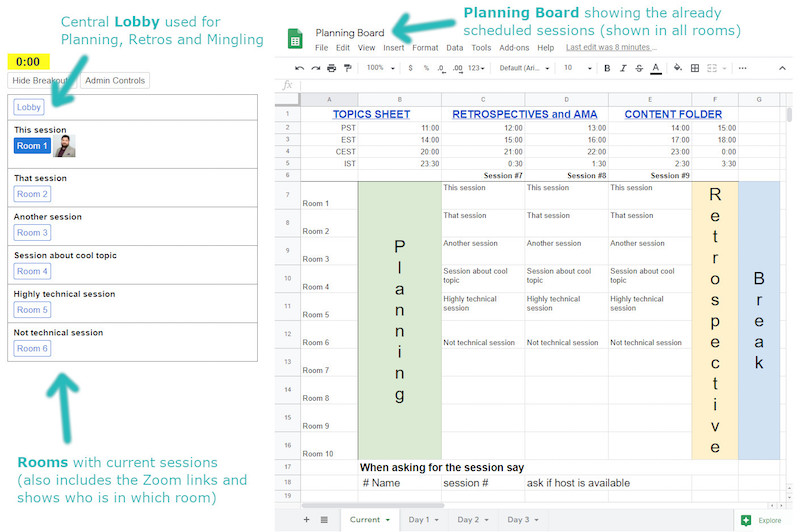 Once the planning was done, we added the session titles to the room overview on the left-hand side. This made it easy for the participants to know which session was happening in which room, and joining the respective zoom call was just a matter of clicking on the correct room.

Also, having a central Lobby was very helpful. People that joined the unconference were placed in the Lobby by default, and planning and retrospective sessions were run there as well.

Overall our remote unconference went very smoothly. We got great reviews from our attendees as well! The picture below shows an overview of the NPS score that we track for our events via a survey. 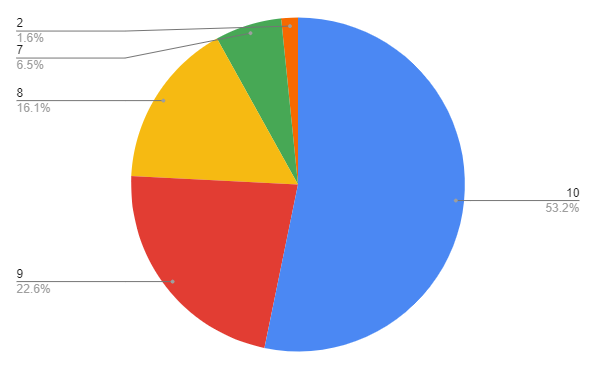 NPS Evaluation: On a scale of zero to ten, how likely are you to recommend this event?

If you only wanted to know how we have organized our remote unconference, you can stop now. Thanks for following-along until here :)

In the rest of this blog post we will evaluate what made this event work for us, how the remote format might even be superior to the in person event in certain ways, and how we hope to improve our remote unconferences in the future.

We ran the unconference like we would any agile software development project. We would look at a tool we thought would help us, do a minimal amount of implementation and then try it with a small audience of 3-5 people. We would get some feedback and improve, then test it with a larger audience of 7-10 people. And repeat this inspect and adapt cycle until we had a product we could use for the event.

In the cases where we would be asking people to do something beforehand, we knew we would communicate via email, so we used a google doc with the instructions and had our test audiences edit it where they experienced confusion or problems.

In cases where the event host would be explaining things live, we used video chat to test this scenario and had people speak up as they encountered issues, but much more than that, we listened for the questions they asked and used them to adapt our process.

While we saw this as an opportunity to reinvent the unconference, we also started with the guiding principle that we wanted to keep as much of the freedom of the unconference format as possible. It would have been much easier, or so we thought, to plan a traditional conference where we created all the talks and planned their times beforehand and then just hold the event. But we felt strongly that this would diminish the value of the event, as the beauty of the unconference format is in its ability to let the participants drive the agenda themselves in an ad-hoc fashion even while the event is unfolding.

So we focused our efforts on finding ways of making the unconference format work online, which actually ended up a lot less work to organise then it would have been to find speakers, plan slots, etc.

In our case this also meant that the majority of the attendees were already familiar with all the mechanics, as we had held many unconferences before. All we needed to teach people was the new tooling and this made the whole event much smoother.

At the end of the day, the thing that always makes these events successful is that it is a collaborative event and we are gathering feedback and adjusting the event based on that feedback.

This means we don’t need to solve all the problems up front, and frankly, we can’t anticipate what those issues will be. It’s also very expensive to try and anticipate and plan for any issue.

By using retrospectives we are able to harness the ideas and feedback from the participants in order to improve the event as we go. This has the added benefit of giving the attendees more ownership over the event and more understanding when things aren’t perfect.

Benefits of the Remote Format

While there was widespread agreement that the remote unconference isn’t as good as the in person events, there were some things that were actually superior.

There were some things that caused issues. The following is based on what we as the planning team observed, as well as participant feedback gathered during and after the event.

One thing you really missed out on when not flying to the same place was the feeling of it being an offsite. People are away from their normal jobs, and their families and normal day to day commitments. While that has some downsides, for the event itself it’s a big plus. We found it was much harder to achieve the same level of focus, people were distracted by their normal jobs, we lost out on all the great conversations that happen in the evenings at the social events, and people monitored their slack and email much more closely than they would have otherwise.

Being spread across 13 hours of time zones caused a lot of inefficiencies and some complaints.

Firstly, it meant we had to do more planning sessions to plan a smaller agenda, since we wanted to have time zones being able to have overlapping sessions as much as possible. So we could only hold a few sessions before another time zone was waking up and we needed to plan again in order to include them.

Another challenge was breaks for food and rest. We decided not to have official break times while holding the event and ask people to find their own time slot to have them. This was something that people were not pleased with and we will definitely be changing in the future.

One of the most valuable things from these events has been people getting to know each other, not just because of the vibe that creates, but also because informal networks are how many things really get done in an organization. We tried to arrange a few slots for people to engage in social activities, but it wasn’t a huge success. Next time, we will put more focus on preparing this.

This is our account of the experiment as a first-time remote unconference organizers. Overall we like it for the benefits explained above. Even though we are hoping we’ll be able to organize in person events in a post-Corona world again, we will certainly hold remote unconferences again given the success of this one.

If you are looking to organize a similar event, we hope you find the instructions useful. If you need hands-on support in organizing such an event, please contact Jeff Campbell who is offering this as a service.

We would love to hear about your experience, so that we can improve our events as well. If you have any questions or comments, please use the commenting section below.