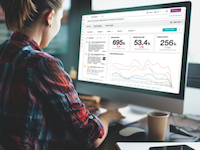 Our UX team updated Meltwater’s user personas in 2021. Originally created in 2016, they needed to be revised due to changing markets, changes in our product, and the industry as a whole. In this post, Andy Proehl, our director of user experience design shares what we changed and what we learned in the process.

Personas are generalized representations of a product’s users. They can be created from user data or interviews, but it is critical that they are based on real information from actual customers. It is impossible to know each customer individually, so personas help businesses understand the spectrum of users and their needs and challenges as it relates to the business. The goal is to generate empathy from the target audience, typically product teams, which include product managers, developers and designers, as well as key stakeholders, like executives.

We completed the first version of our personas in 2016. We started with a general interview script, survey data, and a hypothesis regarding who our users were at the time. We interviewed about 20 users and customers, and a dozen account representatives in different regions and countries for a sense of users from different markets. We then analyzed the findings to create the personas. Lastly, we gave each persona a name and illustration to make them more human and memorable. 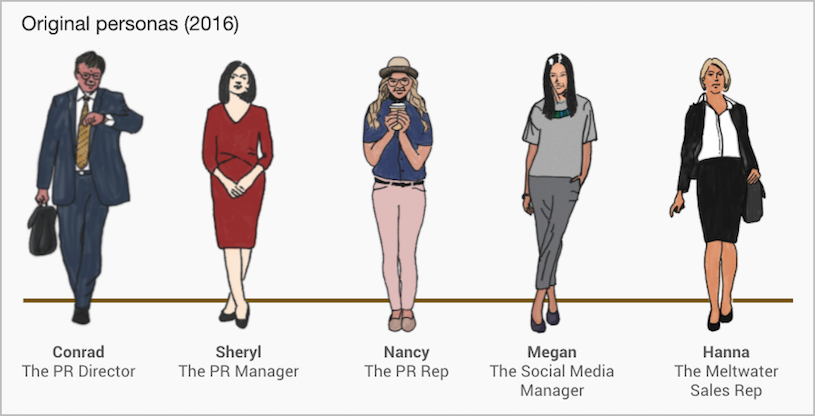 What worked. What didn’t.

The 2016 personas were a big success. They were embraced by executives and used by the majority of the product teams. The core personas, Conrad, Sheryl, and Nancy, were known across the company. Sometimes personas fall flat, or are ignored, but we were surprised by the level of engagement by our colleagues.

By making Conrad an older white male, we were also implying that directors are white and male. We wanted to change that.

As you can see from the illustrations, our personas were gender and race-specific. This made them specific and memorable. They were more female than male because that was what we had observed in the interviews. But over time, what made them memorable also became a problem. However accurate at the time, we were reinforcing stereotypes. By making Conrad an older white male, we were also implying that directors are white and male. In our updated personas, we decided to remove specific references to gender and race.

Emergence of the Analyst

Meltwater’s service includes a significant analytics offering. Our hypothesis in 2016 was that there were analysts on PR teams digging through the data. However, we didn’t encounter a single analyst in our interviews back then. In 2021, we found and included analysts in our research. This is partly due to the increased focus on measurement in PR. Consolidation with Marketing teams was also a driver, as they have been measuring their impact for much longer.

In 2016, we described certain users as “one man shops”, but we stopped short of making them a persona. Many nonprofits and industry associations that use Meltwater have tiny PR departments where one or two people do it all. They monitor coverage, respond to media inquiries, do the day-to-day monitoring, and generate reports for their stakeholders. These users wear many hats and use our applications intermittently. The result of this is that they must learn some features over and over because they don’t use them often enough to remember. So in 2021, we decided to make them an official persona. 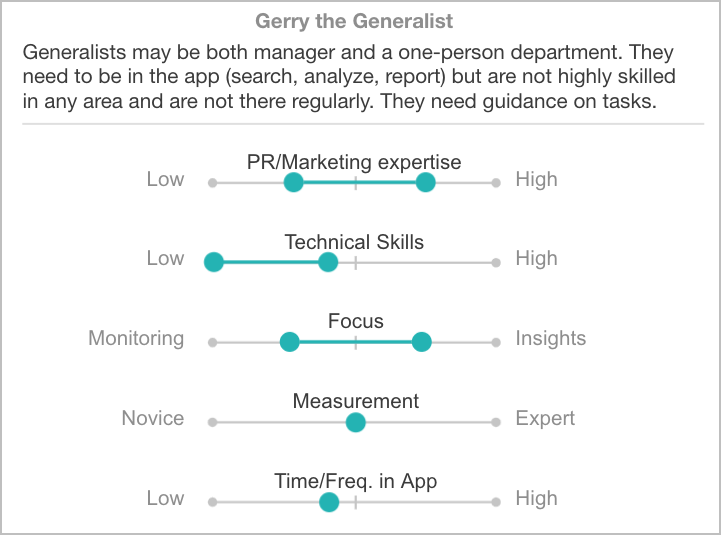 In contrast to the Generalist are the Specialists. In 2016, we had Nancy the PR Rep, someone who was a junior member of a PR team, or sometimes a summer intern. In the new research, we found many types of specialists using our software. There are people who manage social media activity and publishing or those who manage marketing campaigns. On the PR side, there are typically specialists who do journalist research, curate newsletters, or put together weekly reports. They are a critical user for Meltwater.

A key change we decided to make in 2021 was to remove gender and race from the picture so as to avoid reinforcing stereotypes. This presented a new challenge of how to name our personas. We considered using the names of prominent cities where we have offices. One set of personas we read about used the names of Greek gods as a way to anonymize but also empower the group they were profiling. Ultimately, we decided to use alliteration and a set of gender neutral names like Cameron the CMO and Gerry the Generalist. While the names feel a bit hokey or cheeky, we hope they will aid in remembering them. Here are the six personas set within an overview diagram. 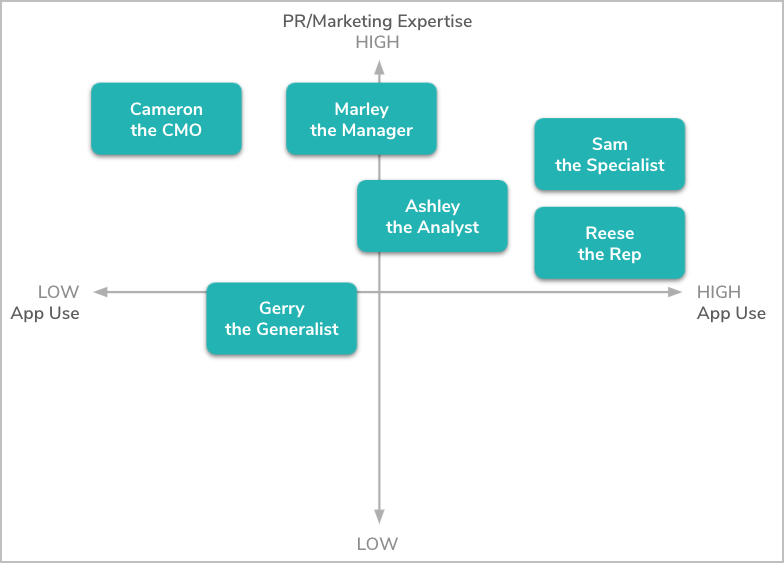 What we would do differently next time

Of course, as soon as you release a product, you see the flaws or have ideas about improvements. This is also the case with personas. Some things we’d like to explore in the future include:

Like software, personas require updates. They are frequently debated in the UX Design community and can be controversial. When done without talking to your users, they can reinforce internal misconceptions. When done correctly, they help product teams empathize with users and want to solve their problems.

How are you handling user personas? Have you integrated topics like diversity and accessibility into them? We would love to hear from you in the comments below.