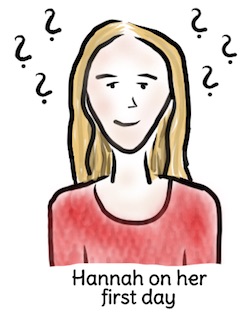 In this post we will look at how we at Meltwater speed up the onboarding of new Meltwarriors by assimilating them into the team and company culture, using these four simple tools.

Meet Hannah. Tomorrow is her first day on her new job at Meltwater. She is a little anxious over fitting in with the people, but really excited about her new job. She wants to prove herself and be a productive member of the team. A million thoughts are running through her mind: Should she bring her own lunch or will they go out to eat? What will happen during the first day?

Let’s see how we can shorten this. First up, the initiation ritual.

It comes naturally to us to introduce a new member to a group through, sometimes, fairly weird rituals. Rookie initiation for new members of basketball or baseball teams for instance. Or have a go at googling ‘gang initiation’. Those are all examples of initiation rituals. While these rituals during earlier periods of mankind were a necessity in order to fit in and thereby survive, initiation rituals have stuck with us ever since, and no wonder. They have important psychological effects on both the new team member and the original team members. Some studies and theories in this area give support to that teams that have had strong initiation rituals feel greater group identity and a stronger sense of belonging to the team. 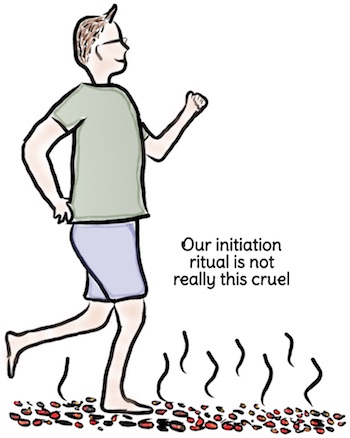 Apart from the effects, such as greater group identity that are a bit fuzzy yet noticeable, the ritual gives Hannah an opportunity to actually become part of the team. During meetings and other work-related interactions, our experience is that Hannah is totally occupied with trying to understand what is being said and, let’s face it, to try to not look like a moron. During the initiation ritual, she instead can focus on the social parts, without feeling judged on her technical skills.

But enough with the dry theoretical talk. What does an initiation ritual look like at Meltwater? In the Gothenburg office, we just recently started thinking about this and are now experimenting in this area. Our first experiment was to get the newbies introduced through a board game night.

Playing Battlestar Galactica, or attempting to play it, was fairly effective in getting introduced to the office characters and interpersonal relationships. That was exactly the kind of stuff we wanted to get out of this. Who turns to sarcasm and mocking when the patience for digging through 20 pages of instructions fails him/her? cough Not me…cough. Who cannot hide his/her nervousness and eats snacks like there is no tomorrow? All these details make up your culture and your company.

How do you introduce people to your company and team? 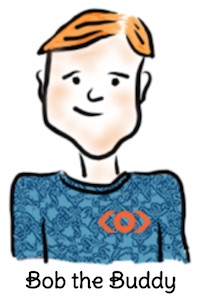 Meet Bob, the Buddy for Hannah. Or rather, the Buddy 2.0. How does he differ from his earlier version, the Buddy 1.x? Previously, our buddy was, like we’ve also seen in other companies, someone that Hannah can go to when she has questions, and someone that shows Hannah where the lunchroom is. What we didn’t realise then is that the buddy actually carries the important role of a cultural bearer, or a culture ambassador.

Bob represents the values, beliefs and implicit rules of your company. He makes sure that Hannah gets exposed to those by ensuring Hannah always has company when going to lunch and he also helps her prioritise her onboarding activities. Bob grabs a coffee with Hannah, arranges team lunches and brings her along to meetings and stuff that is happening on the fly. Culture can only be communicated through exposure so he really marinates Hannah in the company culture, making her a part of it and thereby speeding up her assimilation.

It is really important to marinade a new hire in our specific company culture. Every company is different, so it is essential for new people to understand what we are all about. – Bob the Buddy

Another tool which has proven to be extremely valuable, is the onboarding backlog.

Taken from the agile methodologies, it is a prioritised list of all activities included in the onboarding. Everything from learning about the team’s processes and the company mission to the tools and components that the team works with. Even a team lunch and a teambuilding exercise can be found in the backlog. See below an example of things to be found in our onboarding backlog.

The content of the backlog is generated by the team even before Hannah has started. Once Hannah has started, she and the Buddy, and maybe even the whole team, prioritise and plan the onboarding activities on a weekly basis. This is a great way to involve both the team and Hannah in the process. By letting the team contribute early on in the process, they feel a lot more committed to making Hannah’s onboarding a success. Hannah can now influence her onboarding and adapt it to her and her surroundings. 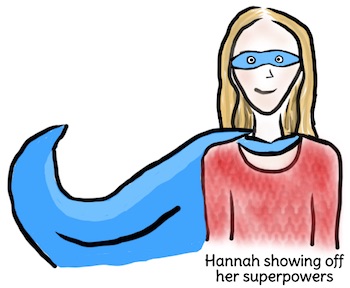 When asking Hannah (and people that joined before her) about their difficulties during the onboarding phase, they frequently mentioned that they found it hard to find their unique way of contributing and that sometimes, they felt a bit useless until they had checked in their first piece of code.

We want to shorten that time drastically, not only because it is stressful for Hannah but also because we truly believe that there are ways for everybody to contribute almost instantly.

We do that by a thing we call purpose workshop where Hannah is given a chance to find her superpowers she can use in the new team. It goes like this: In the purpose workshop both the old and the new team members share what they can help others in the team with and what they need help with from others. It’s not only about technical skills or skills related to Hannah’s role but less apparent superpowers such as being awesome at sorting thoughts or helping with getting perspective on things. Sharing and talking about this makes it easier to find ways to contribute quickly, even if it’s not actually writing code and committing it.

Do you know what yours and your colleagues superpowers are?

We have shown you four tools to speed up the assimilation of a new Hannah. The initiation ritual, where you mark the entrance of Hannah to the team and let her become a part. Bob the Buddy functions as an important culture bearer that brings Hannah with him on a cultural journey. The onboarding backlog helps both the team and Hannah to shape the onboarding experience themselves. Lastly the purpose workshop helps her find her unique way to contribute to the team.

Let us know in the comments how you accelerate the assimilation of a new Hannah to your team and to your company!