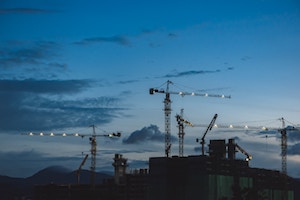 Meltwater takes pride in having autonomous devops-enabled teams. This includes decisions on how to deploy their infrastructure. In this post Andy Desmarais is sharing an introduction to the newest deployment method that his team is experimenting with, the AWS Cloud Development Kit.

You also find more articles like these on Andy’s blog terodox.tech.

Before we get started, this post is not meant to be an introduction to AWS infrastructure in general. It has the assumption that you are familiar with the basics of AWS.

What the heck is a CDK?

Right, so it’s basically a set of tools that are designed to describe a CloudFormation Stack. The stack can then be deployed, updated, and destroyed using the CDK cli.

I can hear you out there thinking about serverless.io, terraform, and other infrastructure as code solutions. The main differentiator with the AWS CDK is that it’s designed with your language in mind. The challenge with serverless.io, terraform, etc is you have to learn a new syntax in order to get anything done. This increases the learning curve for picking up new tooling.

Currently the supported languages are:

For the rest of this post I’m going to focus on Javascript because it is my language of choice, but all of the example should translate to other languages easily.

The CDK cli has the ability to initialize a project. If you’re like me, I like to avoid installing npm dependencies globally. To run the CDK cli without installing globally you can run

This set of commands will create a new directory for our project, move us into the directory, and initialize a CDK project including all of the necessary files and dependencies needed to get running.

You’ll see a set of commands output for using the CDK cli, but we’ll come back to those in a bit.

It starts with a stack

Because the CDK is just spitting out CloudFormation, we have to start with defining a CloudFormation Stack. The stack will be the container that holds all of the AWS resources we want to create.

The init command sets up two files: bin/my-first-cdk-app.js and lib/my-first-cdk-app-stack.js. The file in the bin directory is the entry point the CDK will use when running. It’s not magic though, there is a cdk.json file in the root that identifies the app you are going to be working with.

As you can see, it’s pretty thin. It defines a new cdk.App() and passes that as the scope for a new stack called MyFirstCdkAppStack. The MyFirstCdkAppStack is defined in lib/my-first-cdk-app-stack.js so let’s look at that next.

My first thought looking at this file was “AHHHHHHHHHHH! INHERITANCE!” However, this is one of the parts of the CDK that provides its power. The inheritance model of functionality adoption allow the CDK to hide a lot of the wiring needed to bring together resources within the stack.

Now that we have our stack we can start adding resources to it. Let’s start with a fairly common model at this point: serverless.

The basic building blocks we’re going to create will be an API Gateway with a Lambda Function defined as its handler.

This is a good time to mention how all of the CDK packages are organized. The @aws-cdk namespace will have all of the different modules you’ll need to compile any resource currently supported by the CDK.

With the CDK we can define the lambda function in the same project as the infrastructure. This helps ensure our infrastructure and code are in sync with one another.

The recommended approach is to put the files for your lambda into a resources folder. This will be the location we reference from our CDK script.

This is an extremely over simplified example. We’ll get into more advanced use cases in a bit.

Now that we have a handler for our lambda let’s define it in the MyFirstCdkAppStack constructor:

I want to point out that we don’t have to keep a reference to the lambda we’ve just created. This is because we are passing this into the functions constructor which give the stack all of the reference it needs to keep track of the function. This goes against what we traditionally need to do in javascript, so it’s important to know.

If you are familiar with the CloudFormation definition of a lambda this example will look pretty familiar. This will automatically bring in the code from the resources directory as the code for the lambda. Then we tell it how to locate the handler using [FILE_NAME].[EXPORT_NAME]. This is an extremely simplified example. You can add other properties to be more specific in your setup.

Other properties include (but are not limited to):

There’s a lot that can be configured on a lambda, and this is definitely NOT an exhaustive list.

We have a lambda to say hello to everyone, but we need a way to expose it to the world. Let’s create an API gateway.

Just like with lambda, we’ll need to start by installing the api gateway node dependency:

Now that we have the classes we need installed, let’s create an api gateway that will use our lambda as a handler.

Unlike in the previous example we need to maintain a reference to the lambda in order to set an api gateway integration properly. The CDK uses references as inputs to other classes as a way to convey all the needed references for CloudFormation to function properly.

Api gateway is a much more complex resource than lambda, and because of this it takes more moving parts to get it completely wired. We first create the api gateway with a name and description (These are only used for the console and reporting purposes). Then we have to create the lambda integration which will allow api gateway to wire our lambda to respond to requests. Last we wire the lambda integration to the GET method at the root route (the / route).

And with that we have a stack we can deploy!

Before we deploy the stack it’s a good idea to make sure the CloudFormation it’s producing is what we want. We can do this by running the cdk command:

This will output all of the CloudFormation the CDK generates to the console. Then we can do a quick review to make sure we’re getting everything we were expecting.

Once we’re confident we’re getting the resources we’re expecting, we can deploy with a single CDK command as well!

This will first spit out a table based diff to show us what will actually be created. This is a good time to validate our checks from the synth step. The CDK will pause and wait for us to confirm that we’re happy with all of the resources being created.

This was just a first glimpse into the capabilities of the AWS CDK. You can create almost any resource AWS has to offer. The power here will come from the ability to re-use and encapsulate code using design paradigms we’re already familiar with in our own language of choice.