In Meltwater’s Berlin office, we are enthusiastic users and advocates for Elixir and ruby. Hence we were excited to get the chance to host the Elixir Berlin meetup for the first time this November.

It was the #53’rd edition of the Elixir Berlin already, what a great streak!

Besides hosting the event and sponsoring food and drinks, we were happy to share some of our own Elixir learnings. For some of our presenters it was the first time on stage at a developer meetup, and we can only say that the Elixir Berlin crowd made it very easy for us, so thank you for that!

Find the full list of talks on the Elixir Meetup event page. Below we share details and slides from the talks that the Meltwater presenters gave.

Oh yeah, and did I mention that we have job openings for ruby/elixir in both the Influencer Content team, as well as our API team? We hire Juniors too! 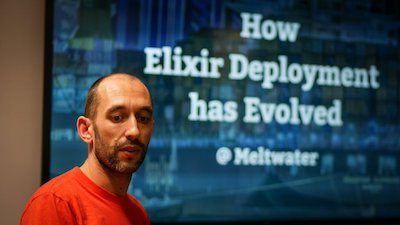 The main talk for the evening was given by Niall on the topic of Deploying Elixir Applications. The talk gave an overview of the architecture of Elixir services behind the Meltwater API along with some of the deployment patterns used, such as Blue/Green Deployments.

He explained how the team started out deploying Elixir components to AWS Elastic Beanstalk using TravisCI and how that has now evolved into deploying to Kubernetes using Drone CI and Distillery. He further shared pros and cons of each approach and addressed some of the problems that can be encountered when deploying Elixir applications. 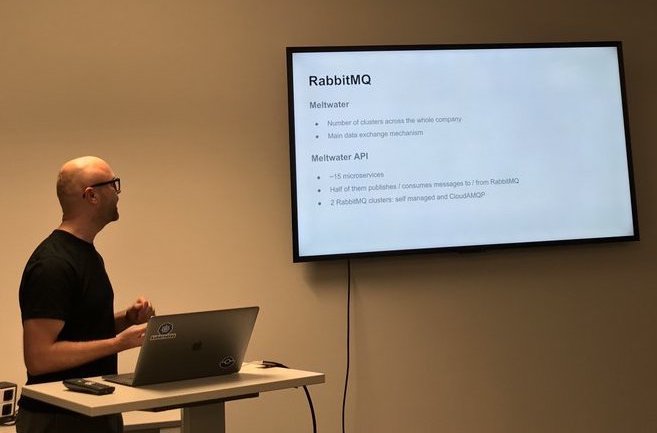 Mateusz gave two lightning talks. The first one about gen_rmq, a simplified publisher/consumer setup for RabbitMQ that he has developed and open sourced.

His second talk was about dependabot, a service that automatically sends you a pull request on GitHub, whenever one of the dependencies of your project needs to be updated.